As we moved into summer I was desperately hoping for rain.  A dry winter and spring had taken its toll and just about every type of plant, including trees, was beginning to show signs of stress.  Grass which normally grows fastest in April, May and June before slowing down in high summer, had already virtually stopped.  Trees were dropping leaves as though the onset of autumn was imminent, and more generally fruit and flowers were coming early.

All of which meant plenty of watering, and I mean plenty: hoses, watering cans and irrigation systems.  I hate to think of the water bill.  We have a lot of large terracotta pots with mixed displays of pelargoniums and summer annuals so daily watering was vital, remembering to feed the pots with seaweed extract weekly.  In the spring I planted 75 metres of new beech hedge and without regular irrigation by now it would have given up the ghost.  Newly planted trees from last autumn would normally expect to have received a good drink over winter, but like the hedge they have also been regularly watered.

Luckily as soon as the school holidays began we got some rain.  You could almost feel the garden, and the gardeners, breathe a sigh of relief.  Of course one down side of rain is all the weeds which have held back suddenly burst into life!

Grass care has been different this year.  The warm, dry spring and early summer meant I had to hold back on fertilising the lawns.  A smaller lawn could have been treated and thereafter watered with a sprinkler, but I have too great an area of lawn to do this, so I just had to wait and let the lawns turn brown.  Now though they have recovered to a good shade of green, as they always do.  Grass is so resilient.

Because I have not been cutting grass as much this season, one thing I did out of season was to scarify an area of grass that always seems to be very mossy.  I took advantage of the dry conditions firstly to treat the moss with moss-killer and then a week later use a mechanical lawn rake to remove all the dead and blackened moss.  This is a job I would normally do in spring or autumn but the dry conditions made the job lighter and easier.

In the garden, I have hundreds of yards of yew hedging to prune.  This is a huge job, but one I really look forward to, but given the time it takes I can only afford to do it once.  In previous years this has all been done in one hectic week in late September to ensure that there is no re-growth after cutting and that the topiary shapes and hedges retain nice sharp edges through until next spring.  This year however I decided to spread the workload and made a start in August.  Yew seems to put on all its growth, up to 12 inches, in just a short time from May to August.  I use a variety of powered hedge trimmers, including long and short reach tools, and make sure they are good and sharp. I still have a long way to go, about 300 yards, but I am getting there. 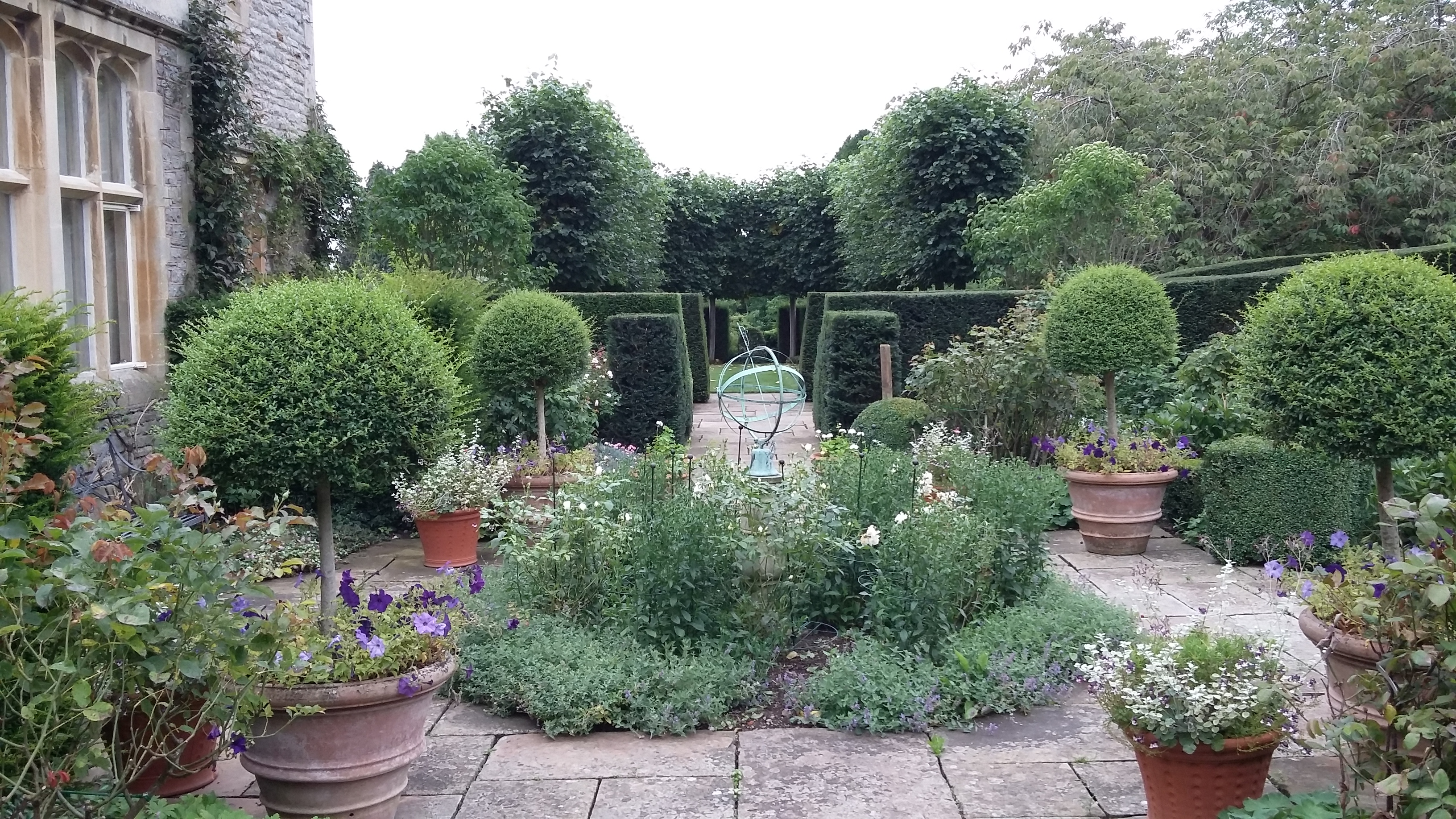 Another big task coming up is to cut back the wildflower meadow and all the areas of long grass where the daffodils grow.  We let all our daffodils die back naturally which means by the time they have done so the grass is quite long.  Rather than cut this during our open season and have great patches of yellow grass, we leave them until the garden closes to visitors.  To cut down the grass and meadow I use a variety of machines and tools.  Small areas are done with strimmers, but the larger expanses are done using a powered scythe.  This makes short work of thick long grass which can be left for a week or so for all the flower seed to drop through to the ground before the dry grass is raked up and put on the compost.

With high summer coming to a close autumn will soon be upon us: dewy mornings and leaf fall, preparations for harvest festival and the end of grass cutting for another year.  But while it lasts enjoy the spectacular colours of perennial borders and all that produce to be harvested in the kitchen garden. 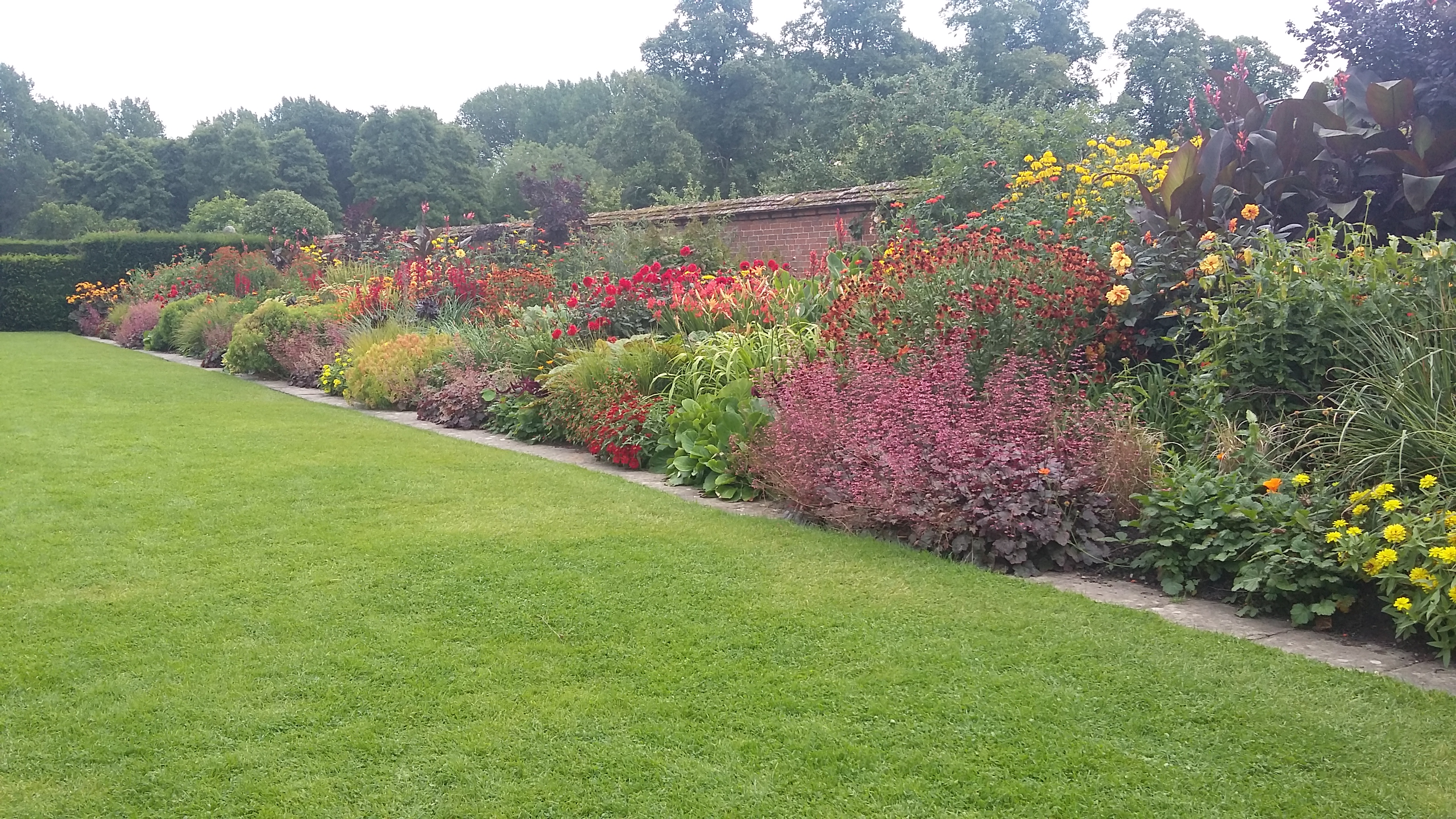 Enjoy the hot colours of a stunning late summer border.